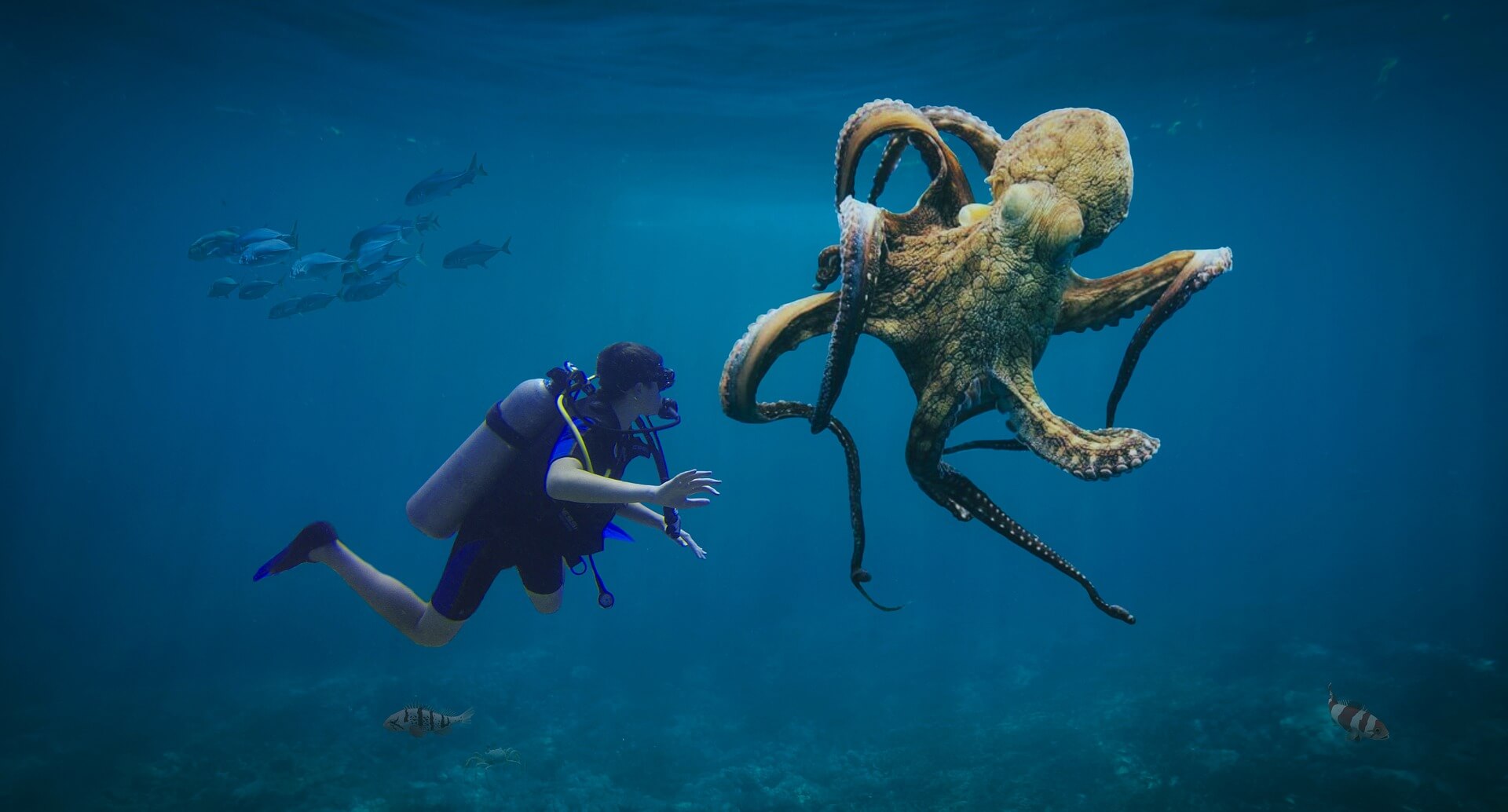 Octopus are generally viewed as the adorable, eye-catching and incredibly brilliant species of the ocean. It is known to have three hearts, with nine brains and eight arms. They belong to the species of cephalopod, which literally means “head-feet”, and are distinctive for a lot of reasons.

One of the reasons for its uniqueness is their ability to compress their bodies to maximum. Some species are able to squeeze in their whole body to any openings that are small enough to accommodate their eyes. The reason is that they have no skeleton at all, externally or internally.

The Giant Pacific Octopus (Enteroctopus dofleini) is considered as the largest octopus species. An adult size can weigh approximately around 15 kilograms or 33 pounds, with its arms that can span for about 4.3 meters or 14 feet. The largest documented carcass recorded was a whopping 272 kilogram or 600 pounds with an arm span of 9 meters or 30 feet. That was a hella big octopus!

Generally, octopus behavior is to avoid humans. But in some cases, it was reported the attacks were made to divers. A precedent happened when a Giant Pacific Octopus that had a length of around 8 feet almost perfectly camouflaged itself, attacked a diver and wrestled to the camera before it let go. You also have to be aware that octopus are venomous but the blue-ringed is known to be lethal to humans. They only attack or bite once it is provoked in any circumstances like accidentally stepping on. They leave lumps on skin which disappear in a day or two, but the worst case is that it can be fatal. The venom contains “tetrodotoxin” which causes paralysis to the muscles once bitten.

What to do during encounters?

Octopuses do not just use their intelligence and lovely appearance for fun. If uncomfortable or worse, threatened, octopuses have been known to defend themselves against humans. So better yet you must be armed with knowledge and information on how to deal with mad giant octopus while scuba diving. These are the things you may follow during this situation.

Most of the time, it will be easier to remove the grasp from small to medium sized octopus. All you have to do is to propel your whole body forward so that you can create a pulling pressure on the octopus arms. By any chance that you cannot remove it or take away the tentacles from you or you are being pulled back, you have to try the next steps.

Octopus have the tendency to check if you are something they will feed themselves. And if not, they will just let you go. But you should not try your luck on the latter. Because at this point, you might be quickly enveloped or wrapped by its octopus web. It is their way to trap their prey through a flexible sheath. Or worse, they might bite you. You have to avoid these happenings by continuing swimming away. By this way, it will continue to put pressure on the arms of the octopus. Octopus will tire out eventually as they are easily worn out and may decide to let you go.

3. Don’t you ever let the octopus arms wrapped around your arms.

The octopus’s way of trapping you will start when they attach themselves to a rock or coral. The next thing they will do is to grab your body using their one or two arms. At this moment, do not let its arms reach you. Because once they have a tight grip on you, this will be the time they will move you towards its beak or mouth. You will have little chance to escape after this.

4. Forcibly remove the suckers away from you.

Every tentacle of an octopus have a stagerring 2,240 suction cups. Each main function is to taste, grip and smell and this is also called as suckers. Just like the name itself, it will suck surfaces like your body as tightly as possible. You have to take away their arms around you as quickly as possible and with great force. You also have to work fast in getting any object close to you once the arms loosen and give it to them. As they will grip this things, it will be your time to swim away.

5. Do somersaults in the water.

You don’t have to be a gymnast to do this trick. All you have to do is turn your body in circles so that the octopus will get irritated and eventually release you totally.

6. If still nothing works above, swim above the surface!

Naturally, octopuses are not fond of air. This way once you go up above the surface, the octopus will leave you but it will be better to still remove its suckers while going above.

Octopus may be too gentle to look at but you have to be aware that this adorable and brilliant creature can strangle you to somewhere any diver doesn’t want to experience. Having prior knowledge on what to do if this thing will happen is a great way to learn and prepare yourself for your next diving under the sea.

Importance Of A Line Cutter

Spearfishing 101: How to Fish Mahi-Mahi